Within the framework of the relevant orders signed by the President of the Republic of Azerbaijan Mr. Ilham Aliyev on “Declaring 2022 the Year of Shusha” and “Celebrating the 190th anniversary of Khurshidbanu Natavan” on September 9, 2022, at the 190th anniversary ceremony of Khurshidbanu Natavan held in Shusha, the cultural capital of our country, vice-president of ANAS, academician Isa Habibbayli, general director, scientific secretary, PhD in philology, associate professor Azizaga Najafzadeh and senior researcher of the Department for the study of multidisciplinary manuscripts, prominent Karabakh scientist, Doctor of philology, professor Ragub Karimov attended the event.

As part of a series of events held on the joint initiative of the Ministry of Culture of the Republic of Azerbaijan, the Union of Writers of Azerbaijan and the Administration of the State Reserve of the city of Shusha, an exhibition dedicated to the study of manuscripts, printed copies of the works of the last heiress of the Karabakh Khanate, an outstanding poetess, public figure, paintress and philanthropist Khan gizi Natavan was organized. The exhibition participants were particularly interested in the “Flower Notebook” by K.Natavan, kept in the fund of the Institute of Manuscripts.

The presentation of the book “Shushaname” by academician Teymur Karimli took place within the exhibition. Minister of Culture Anar Karimov, chairman of the Culture Committee of the Milli Majlis Ganira Pashayeva, chairman of the Writers Union Anar, vice-president of ANAS Isa Habibbayli expressed their heartfelt words about the book and highly appreciated it.

Later, the first solemn meeting was held in front of Khan gizi's house in Shusha in the 2nd half of the XIX century under the auspices of Khurshidbanu Natavan, attended by well-known poets and musicians of the region and played an exceptional role in the formation of the literary environment of the period in order to restore the activity of “Majlisi-uns”. Young writers from all over the Turkic world attended the meeting, along with representatives of the government of our republic and many prominent literary figures, academician Teymur Karimli and professor Ragub Karimov made a speech.

Professor Ragub Karimov in his speech gave detailed information about the literary and cultural environment of XIX century Karabakh and the literary and social activities of Khurshidbanu Natavan.

The event continued with the reading of new poems of the restored “Mejlis-uns” members dedicated to Karabakh - Shusha.

© All rights reserved. When using news www.science.gov.az a reference to the site is necessary.

A memorandum of cooperation was signed between the Central S...

Statement of the Scientific Center for Albanian Studies of t...

Acquaintance with archaeological excavations carried out in...

The next online event was organized within the joint project... 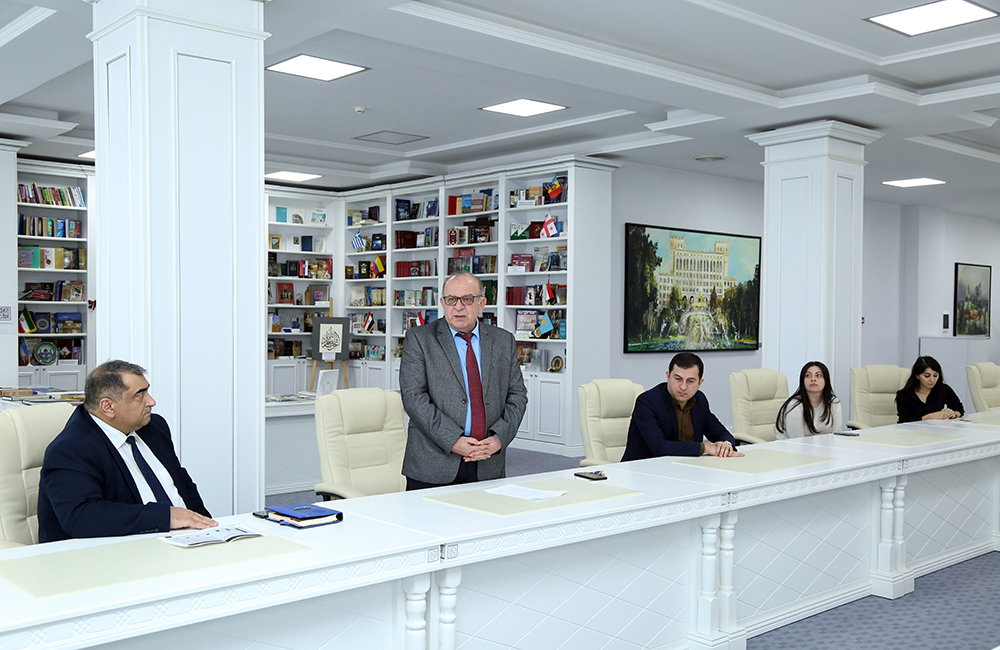 
The President of the Turkic Academy...