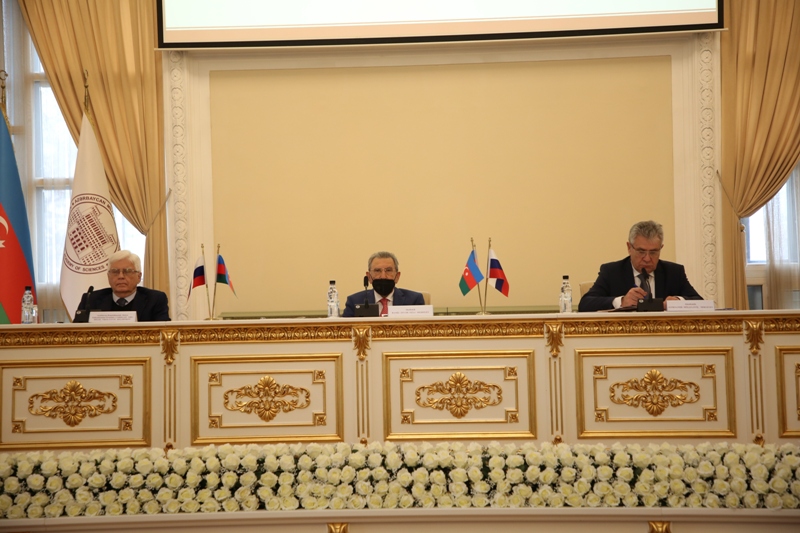 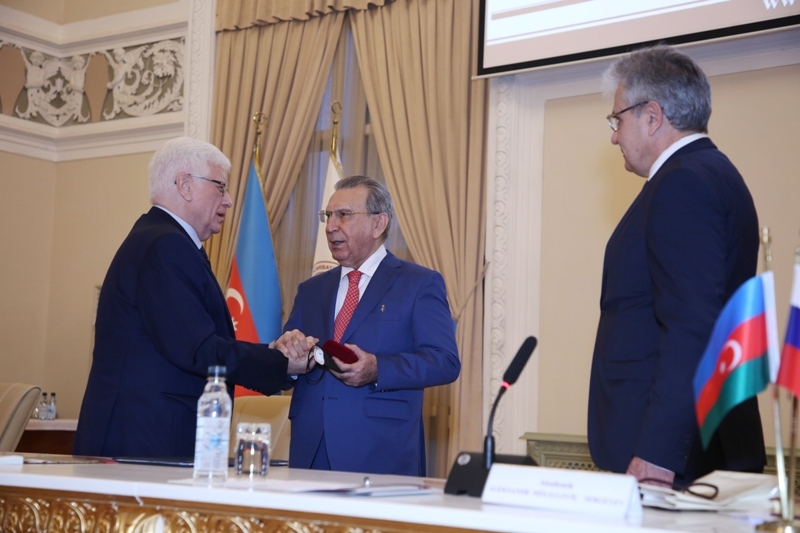 Today, the National Academy of Sciences of Azerbaijan (ANAS) hosted a meeting of the delegation headed by the President of the Russian Academy of Sciences (RAS), Academician Alexander Sergeev, who is on a visit to our republic, with the scientific community of the country.

The guests first visited the Alley of Honorable Burial and paid their respects to national leader Heydar Aliyev, laying wreaths and bunches of flowers at his grave.

The memory of prominent ophthalmologist, academician Zarifa Aliyeva was also honored, bouquets of flowers were laid on her grave.

Flowers were also laid on the graves of the outstanding statesman Aziz Aliyev and the famous scientist, doctor Tamerlan Aliyev.

The event noted that as a result of the relationship with Russia in the scientific field, the Academy of Sciences of Azerbaijan was founded in March 1945. World-famous Russian scientists also took an active part in the formation of the Academy of Sciences and the training of national scientific personnel. It was also stressed that during the years of independence, more than 60 documents were signed between the Academy and the Russian Academy of Sciences in the field of cooperation in all areas of fundamental, applied, natural, humanitarian and social sciences, and ANAS employees are still participating in more than 20 projects that are being implemented within the framework of competitions announced by scientific foundations of both countries.

Then a video clip dedicated to the 880th anniversary of Nizami Ganjavi was shown.

Speaking at the event with an introductory speech, the President of ANAS, Academician Ramiz Mehdiyev welcomed the guests and expressed his satisfaction at meeting them at the largest temple of science in Azerbaijan. Recalling that the last visit of the RAS delegation to our republic took place in 2019, the academician stressed that during this time there have been cardinal changes in the country, Azerbaijan has entered a completely new stage of its historical development, and noted that these changes are undoubtedly based on the liberation of Karabakh under the leadership of the victorious Supreme Commander of the Republic of Azerbaijan Ilham Aliyev and ensuring the territorial integrity of Azerbaijan.

The head of ANAS stressed that in accordance with the new line of development of the country, the Academy of Sciences has developed a "National Strategy for the sustainable Development of Science in Azerbaijan for 2022-2030" and is implementing appropriate measures to implement it.

Academician Ramiz Mehdiyev noted that the Republic of Azerbaijan attaches great importance to the development of comprehensive relations with neighboring countries, and Russia occupies a special place among these countries. He added that humanitarian and cultural ties, including scientific cooperation with Russia, which has rich cultural values, stable scientific experience and traditions and original humanitarian resources are of great importance for Azerbaijan.

In his speech, Academician Ramiz Mehdiyev also spoke about the significance of today's historic meeting from the point of view of further development of scientific ties between Russia and Azerbaijan. He noted that the "Azerbaijani-Russian roadmap of cooperation in the field of science, innovation and education", which will be signed, provides for the expansion of mutual cooperation with the Russian Academy of Sciences in the field of science, education and technology and the strengthening of long-term scientific ties in priority areas for both sides. The head of ANAS added that the main directions of the Roadmap are the identification of priority areas of activity relevant for both countries and issues of support for young talents and scientists.

Thanking the leadership of ANAS for the cordial reception, the President of the Russian Academy of Sciences, Academician Alexander Sergeev stressed that yesterday he met with President Ilham Aliyev and this meeting is important from the point of view of the development of scientific ties between the two countries.

The President of the Russian Academy of Sciences said that in recent years, numerous agreements have been implemented jointly with ANAS covering various scientific areas, especially the fields of natural and technical sciences. Stressing that there is a need to sign new documents for the further development of cooperation, Academician Alexander Sergeev noted that the "Azerbaijan-Russia Roadmap for Cooperation in Science, Innovation and Education", which is planned to be signed at today's event, will play an important role in the further development of relations between the scientific structures of both countries.

According to the Roadmap, the scientific structures of Russia and Azerbaijan plan to intensify and expand their activities in the field of advanced areas of science and technology development within the framework of existing national and international agreements. Also, within the framework of cooperation between the two structures, work will be carried out on the development of academic mobility and the creation of dual degree programs using the capabilities of national and international programs.

The President of ANAS, Academician Ramiz Mehdiyev noted that today's meeting of the delegation headed by Academician Alexander Sergeev with the scientific community of Azerbaijan was held in an atmosphere of productive collaboration.

Speaking about the importance of the "Azerbaijan-Russia Roadmap for Cooperation in Science, Innovation and Education", Academician Alexander Sergeev noted that the document will create ample opportunities for joint promotion of advanced scientific and technological research, identification of priority scientific areas relevant to both countries, and support for young scientists and talents.

The President of the Russian Academy of Sciences stressed the importance of the Roadmap in terms of optimizing the mobility of scientists, as well as the integration of science, innovation and education into society and the economy of both countries.

The meeting ended with the adoption of the declaration.

© All rights reserved. When using news www.science.gov.az a link to the site is required.

Academician Arif Hashimov met with full and corresponding me...

The possibilities of cooperation between ANAS and the German...

Academician Arif Hashimov met with scientists of the Divisio...


An online lecture was held on the t...


A meeting on improving the internat...


The meeting of the Presidium of ANA...